Australians executives looking to stay at the MGM Grand in Las Vegas for CES may want to have second thoughts.

The MGM is one of the older hotels in Las Vegas and it’s showing its age due in part to cost cutting and cost gouging by management, who appear to be obsessed at squeezing a dollar out of anything they can including their rooms.

I have attended 22 CES shows in Las Vegas, this is the worlds largest technology show, and over those 22 years I have stayed at the MGM for 20 of the 22 years.

The cost per night Has gradually crept up and this year was A$618, for that you a Queen-sized bed in a room that only has one light between two queen sized beds.

So far no one has explained what this is for.

But you do get free Wi Fi, but you don’t get a robe in your room, breakfast, a kettle or coffee making facilities.

I strongly recommend that you run out to the ABC Convenience store where the sale bottle of water is A$1.00. 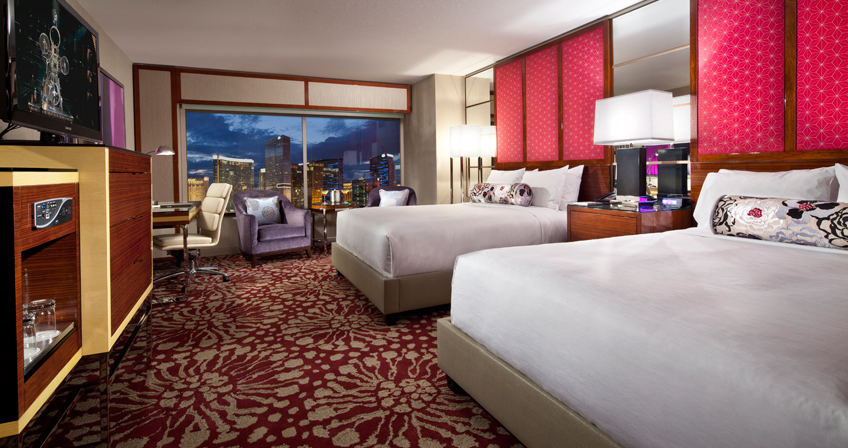 What MGM advertising shows of the same room. Whats missing from the image is the screen on the window that restricts light to the room.

In the room management are so tight that they only use low voltage lights resulting in the room being impossible to see in especially as the room is 41 square metres or 464 square feet.

There was supposed to be a second light in the room as per the hotels publicity images used online, when I questioned management about this they sent a person to my room who said, “Sorry but we don’t have any additional lights”.

“Yes, there is supposed to be one, but we have none. There is nothing I can do about it”. There was a desktop light over a desk but this was no good when one was trying to read.

Then there was the issue of no hot water.

After three cold showers I complained to the front desk, when a maintenance executive came to my room he ran the water for more than 9 minutes, he then informed me that to get hot water I had to run the taps for between 8-10 minutes.

When I pointed out that in the mornings I don’t have time to run a shower for 10 minutes “just to get hot water” he said, “sorry It’s not my fault”.
This is also a hotel that has put restrictors on their showers and basins to restrict water flow.

From what I have seen the MGM has become a tired old hotel with the rooms more like a cheap 3 star motel than a premium hotel especially as they are asking a premium price for their rooms during the CES show.

If you have had a bad experience at the MGM Grand email me with your story: [email protected]